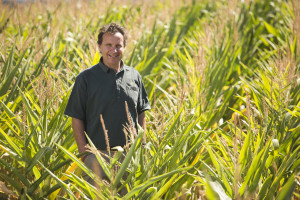 The pressure to protect Hawke’s Bay’s GM Free status mounts as the Prime Minister, Ministers and MPs descend on Hastings for a major economic summit hosted by Ngāti Kahugnunu.

A group of exporters and growers from Pure Hawke’s Bay are using the “Taniwha Dragon” summit as an opportunity to promote the economic benefits of keeping Hawke’s Bay GMO Free.

Speaking at the summit on Monday, one of Hawke’s Bay’s largest growers and exporters, John Bostock spoke about positioning Hawke’s Bay produce at the premium end of the market place.

“Quality branded premium products are Hawke’s Bay’s future. The government aims to double exports by 2025, but we will never do it by producing more low end commodities. We must sell at the top end,” said Mr Bostock.

“GMOs have no place in that mix and are associated with low end commodities such as soya and feed maize. We are very lucky that we have not released any GMOs into the outdoor production system and we need to keep it that way.”

In a speech to ministers Mr Bostock said he had just been in Europe at the world’s largest fresh produce trade show.

“I have just got off a plane from Europe, but while I was there speaking to customers, it’s clear that anyone working in the market place knows that GMOs have no future for us. I have been talking to EDEKA, the largest retailer in Europe with 12,000 stores. They were stridently clear and told me anyone who gets involved with GMOs will not be allowed to supply EDEKA.”

GM Free Growing regions in Hastings District, Far North, Whangarei and Auckland are all under threat if the Māori Party backs National on this.

The changes Environment Minister, Hon. Nick Smith wants to introduce to the Resource Management Act would enable him to take away the regions’ right to make decisions on key issues affecting their local economy and environment.

Under Clause 360D in the RMA Bill, the Government could strike out Hastings District’s plan rules that prevent GMOs being grown in the territory..

“The Hastings District has decided through the democratic process protect its valuable GM Free status for 10 years to allow food producing companies to brand and differentiate themselves as GMO free.

“The Māori Party has made clear it supports GM Free regions and has real concerns about the proposed change to the Resource Management Act. We hope they will stand strong,” said Mr Bostock.

Prior to Christmas, the Māori Party told Dr Smith in a letter that they did not support new regulatory powers (under s360D(1)(d)) if he can use them to prevent regions from creating GM Free zones.

All other political parties have condemned the clause and the Māori Party now is all that stands between the minister’s ambitions..

Ngāti Kahungunu chairman Ngahiwi Tomoana said he hoped the Government and the Māori Party would listen to the voice of the regions.

“We have a duty for our people to provide the best food from the best land on the planet – free of genetic modification.

“We will work face to face and shoulder to shoulder with all our communities and we won’t allow anyone to take these rights from us.”